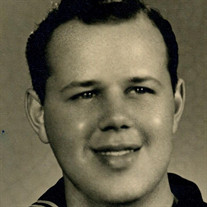 Cordaro, Carmen Robert “Bob” 92, formerly of Clifton, New Jersey, passed peacefully on Sunday, July 8, 2018 at his home in West Milford Township. A lifelong Passaic County resident, Bob was born in Passaic on April 1, 1926 to Anna (Mikulik) and Joseph Cordaro and lived in Clifton for 68 years before moving to West Milford Township in 1998. While Sears Roebuck & Company, Sacred Heart Church, the Stock Market and the Boy Scouts of America would benefit from Bob’s capabilities, energies and devotion, his heart belonged to his loving wife, Ann Bottanelli “Botts” Cordaro, who was his cherished companion for 70 years until her death in 2014. His children’s escapades, opinions and well-being challenged Bob’s virtue of patience, but he excelled as a fair disciplinarian and loving father whose example instilled in them a love of family, the importance of friendship, the value of a hard earned dollar and the thrill of traveling. A member of the “Greatest Generation” Bob enlisted in the Navy in 1944 and served in the South Pacific during World War II. Bob continued serving in the Naval Reserve until recalled to active duty during the Korean War. Honorably discharged in 1952, Bob proudly wore his Navy cap and daily displayed his American Flag until he died. In his spare time, Bob was Chairman of Boy Scout Troop 4 of Sacred Heart Church, a member of Sacred Heart’s Holy Name Society and an usher for decades at Sunday Mass. In 1983, Bob received his Fourth Degree from the Regina Mundi Council 3969, Clifton, Knights of Columbus. The purpose of this Degree is to foster the spirit of patriotism and active Catholic citizenship – which was Bob’s creed. It was Bob’s privilege to serve on the Bishop’s Diocesan Catholic Committee of Scouting. Bob also served as a president of the Bald Eagle Townhouse Association and was Vice-Commander of American Legion Post 347 who recently honored him with a citation for 60 years of continuous service. Bob is survived by his loving children, Bobby Cordaro (Mariel) of Clarkston, Michigan and Barbara Ann Cordaro of Caldwell, New Jersey. Bob was so very proud of his grandchildren, Danielle Ann Cordaro of Akron, Ohio and Rob and Dawn Cordaro of Almont, Michigan. Bob delighted in hearing about the activities and achievements of his great-grandsons, Ryan and Alex of Almont, Michigan. Claire Carline of Winfield, Illinois was Bob’s devoted and dear sister-in-law. Funeral from the Marrocco Memorial Chapel, 470 Colfax Avenue, Clifton, on Saturday, July 14 at 9:15 AM. Family and friends may visit on Friday, July 13th from 3 to 7 PM. A lifelong devoted parishioner of Sacred Heart Church, Clifton, New Jersey, Bob’s Funeral Mass will be celebrated there on Saturday at 10 AM, with Military Honors immediately following the Mass. Burial will be private at the Brigadier General William C. Doyle Memorial Cemetery. In Bob’s memory purchase a poppy from the American Legion’s annual sale or display the American Flag in appreciation of his reverence for the USA.

The family of Carmen "Bob" Cordaro created this Life Tributes page to make it easy to share your memories.

Send flowers to the Cordaro family.