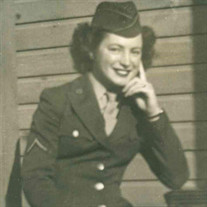 Celia Batelli (Cioletti), 96 of Wayne, and Boca Raton, Florida died peacefully of natural causes on May 7, 2020. Born in Alberta, Pennsylvania, the family eventually moved to East Paterson, New Jersey where she spent her formative years. After graduating Lodi High School, Celia worked for Allen B. Dumont as his secretary. Hearing her call of duty, she enlisted in the Army during World War Il. She was a Corporal stationed at the 321st Army Air Force Base in California, where she was a nurse's assistant for the wounded soldiers. She wrote many hand written letters to wives, mothers, and families on their behalves. She returned to her family after being honorably discharged. She met her husband, Joseph S. Batelli, in 1952 and they married in 1954. Celia helped her husband as a bookkeeper for his company, Batelli Electrical Contractors, before becoming a mother of two sons. She enjoyed many years with her family at their home on Long Beach Island, where she enjoyed fishing, crabbing, and swimming. Her favorite pastime was reading a nice mystery or romance novel on her deck looking out at the ocean. But her greatest joy in life was being a wife, mother, and grandmother. Celia is survived by her husband of 66 years, Joseph S. Batelli, her son Louis J. Batelli, and her daughters-in-laws Erika and Monica Batelli. She is predeceased by her son, Joseph S. Batelli Jr. She leaves behind her beloved grandchildren, great grandchildren, niece, and nephews. Funeral Services will be private. Arrangements by Marrocco Memorial Chapel- 470 Colfax Avenue, Clifton. In lieu of flowers, donations can be made to the Fidelians of America- 219 Manchester Avenue, North Haledon, NJ 07508.

Celia Batelli (Cioletti), 96 of Wayne, and Boca Raton, Florida died peacefully of natural causes on May 7, 2020. Born in Alberta, Pennsylvania, the family eventually moved to East Paterson, New Jersey where she spent her formative years. After... View Obituary & Service Information

The family of Celia Batelli created this Life Tributes page to make it easy to share your memories.

Send flowers to the Batelli family.