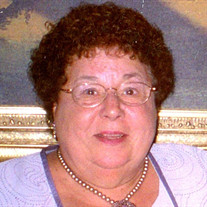 Neglia, Claire G. (Graglia), of Clifton passed away on September 24, 2018. Beloved wife of the late Anthony J. Neglia. Loving mother of John and his wife Deborah of Clifton & Antoinette & her husband Frank Russin of Clifton. Grandmother of Melissa Curtin & her husband William, Kimberlee Doktor & her husband Michael and Anthony R. Neglia & his wife Kristin. Great Grandmother to William Curtin III, Nicholas and Matthew Doktor, Adrianna Neglia. She is also survived by her twin sister Elaine Licata of Fort Lee. Claire was born in Passaic and was a lifelong resident of Clifton. She graduated Clifton High School in 1947 and attended St. Mary’s Hospital School of Nursing and Jersey City State College where she obtained a BS in Health Education and Nursing. She was a Health Occupations Teacher at Passaic County Technical Institute for 26 years, she was also a Registered Nurse and worked for Dr. Francis Catanzaro and the Passaic Board of Education. Claire had many accomplishments, she received many awards and certificates during her career, she was chosen Teacher of the Year in Passaic County in 1988, and she also received the National HOSA Advisor of the year and a Certificate of Merit from Passaic County Medical Society. She was a member of the American Vocational Association, NJ Retired Educators Association, Geraci Citizens League, Passaic/Clifton Ladies of Unico, Boy Scouts Association and the American Red Cross. She was a parishioner of St. Anthony of Padua RC Church in Passaic and St. Katharine Drefel Church in Cape Coral, Florida. Funeral from the Marrocco Memorial Chapel – 470 Colfax Avenue, Clifton on Saturday, September 29, 2018 at 9:15 AM followed by a Funeral Mass at Sacred Heart RC Church in Clifton at 10 AM. Interment St. Mary’s Cemetery. Visiting on Friday 3-5 PM and 7-9 PM.

The family of Claire G. Neglia created this Life Tributes page to make it easy to share your memories.

Neglia, Claire G. (Graglia), of Clifton passed away on September...

Send flowers to the Neglia family.