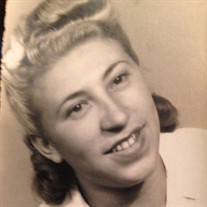 It is with great sadness that the family of Dana Eugenia Owen announces her passing, on January 22, 2019, at the age of 94. Dana was preceded in death by her husband, Gerald Elias Owen of Malakoff, Texas. She is survived by her daughter, Dana V. Lechleiter; granddaughter, Dana Marie Lechleiter of Towaco, New Jersey; her son, Gerald A. Owen of Austin, Texas; and grandson, Cole Milstead of Kalispell, Montana. Biography Dana Czerniawsky Owen was born on March 6, 1924 in Zbaraz, Poland, formerly Ukraine. Dana and her family, with the help of the underground, fled the occupation of Poland from the East by the Russians and the German invasion from the west in 1939. They found refuge in Austria. As an adult, Dana, who was fluent in seven languages, acquired a position as an interpreter with the UNRRA (United Nations Relief and Rehabilitation Association). She helped many victims of war immigrate to the United States and found them shelter and other basic necessities. During that time, Dana Czerniawsky, met a soldier, Gerald E. Owen. During World War II, as a member of the 36th Infantry Division, Camp Bowie (Fort Worth), Texas, Gerald was sent to the European Theater of Operations (April 1943). He saw action and was later hospitalized at Landstuhl Medical Center, Germany. They fell in love, got married, and settled in San Angelo, Texas, where they had two children: Gerald A. Owen and Dana V. Owen (Lechleiter). Concurrently, Dana’s parents, Josepha (Osypa) Pyszczyk Czerniawsky and Basil Czerniawsky, settled in Passaic, New Jersey. In 1955, Dana Owen and family joined the Czerniawskys in Passaic. They were parishioners of St. Nicholas Catholic Church in Passaic. Later, Dana began her teaching career in St. Nicholas Ukranian Catholic School after she enrolled her children there. She taught during the day and attended Seton Hall University at night, eventually receiving her BS and MS degree in Education. In the summer of 1973, Dana and Gerald moved back to Texas when her husband retired from the Passaic Post Office. She continued her teaching career in The Cross Roads Independent School District, Malakoff, Texas and attended Texas Eastern University, receiving a degree as a Reading Specialist. In 2014, Dana became ill and came to live with her daughter, Dana Lechleiter, in New Jersey. She was called to rest on January 22, 2019. Funeral Services courtesy of Marrocco Memorial Chapel 470 Colfax Ave. Clifton, NJ 07013 Funeral Services are as follows: February 2, 2019 (Saturday) 10:30 St. Nicholas Ukrainian Catholic Church 217 President St. Passaic, New Jersey 07055 Affiliating at the funeral mass will be The Rev. Andriy Dudkevych. All are invited to the repass to celebrate the life of Dana E. Owen immediately after the mass at: The Mountainside Inn 509 Hazel St. Clifton, New Jersey 07011 Memorial Donations Memorial Donations in the name of Dana E. Owen may be made to: St. Jude Children’s Research Hospital 262 Danny Thomas Place Memphis, Tn 38105 1-800-822-6344 Many thanks to all our family and friends that have supported us through this difficult time.

It is with great sadness that the family of Dana Eugenia Owen announces her passing, on January 22, 2019, at the age of 94. Dana was preceded in death by her husband, Gerald Elias Owen of Malakoff, Texas. She is survived by her daughter, Dana... View Obituary & Service Information

The family of Dana Eugene Owen created this Life Tributes page to make it easy to share your memories.

It is with great sadness that the family of Dana Eugenia Owen...

Send flowers to the Owen family.