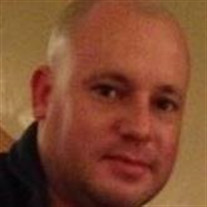 Listmeier, Danny, 33, of Clifton, entered into eternal rest on July 7, 2017 after suffering a Traumatic Brain Injury, and related complications from a motor vehicle accident on May 22nd. Born on February 19, 1984 in Passaic, N.J. , he was a lifelong resident of Clifton. Danny worked in the Laborers and Flooring Union, and ultimately due to love for his community, worked for the past 5 years for the Clifton Board of Education. He was the beloved head custodian at the Clifton High School Annex. Danny's passion for the students, staff, and administration in the ASPIRE program at the Annex was unsurpassed. The many cards he received from the students and staff indicated that Danny's presence in the building gave it noticeable warmth and spirit. Students conveyed that he was a friend and mentor who they could relate to. This years' graduates give credit to Danny for their inspiration to stay out of trouble and work diligently to graduate. Danny was the treasurer of the Clifton Custodial Association, and was very proud and excited to be working for the first time on his association's contract negotiations. He attended elementary School # 8 in Clifton, and was a 2002 graduate of Clifton High School, He received credits in Agricultural Landscape and Design from Morris Community College in Randolph. Known best for his kind and compassionate heart, Danny was a friend to all, and loved by so many! His compassion and generosity toward others defined him. Samantha DeRose, a teacher at the Annex, and treasured friend of Danny, noted the following quote to describe him; "A simple act of caring creates an endless ripple." This is the epitome of Danny, said DeRose. Danny is survived by his loving and devoted parents, Alana Latteri-Pollastro and Gerard Pollastro of Clifton. His maternal grandparents Salvatore and Jean Latteri of Woodland Park and Paramus Veteran's Home. His beloved aunts and uncles Cathy and John Burke of Woodland Park, Anthony Latteri of Valley Cottage, NY. and beloved friend Jennifer Pirovano, Bill and Antionette Latteri of Randolph. Danny is survived by his loving and devoted cousin "sister" Erin Burke-Saba and Rodrigo, and beloved Cousins Matthew, Brandon, Samantha, and Christopher Latteri, and by his newest little love Addison "Addygirl" Saba. Also survived by his beloved paternal step-brother Jerry Pollastro and Step-sister Colleen Pollastro-DeLorenzo and David, Sydney, and Jacob. He is survived by many devoted and loving friends. Danny was Pre-deceased by his loving and courageous cousin Zach Latteri in 2015. Danny recently walked in the Pascack Valley Relay For Life in honor of Zach, and has supported the cause since Zach was diagnosed with Leukemia in 2010. He was a parishioner of St Clare Church in Clifton, where he received his sacraments, and served as an Altar-boy in his Elementary School years. In lieu of flowers, Please consider bringing or sending us a gift card to any store where toys can be purchased. Since Zach's death in 2015, my brother Anthony has been doing a toy drive at the holidays in Memory of Zach. The gifts/toys are delivered to kids in hospitals fighting cancer. This cause was very important to Danny. Danny's parents, along with his family, would like to express their ultimate gratitude to all the selfless people who helped get them through the unimaginable pain, and to the skilled and compassionate staff at St. Joseph’s Hospital in Paterson. Your compassion, kindness, generosity, and support, will never be forgotten. Visiting on Sunday from 4-8 PM at the Marrocco Memorial Chapel – 470 Colfax Avenue, Clifton. Funeral Mass on Monday at St. Clare Church at 10 AM (Please meet at church). Cremation & Committal Service to follow at East Ridgelawn Cemetery.

Listmeier, Danny, 33, of Clifton, entered into eternal rest on July 7, 2017 after suffering a Traumatic Brain Injury, and related complications from a motor vehicle accident on May 22nd. Born on February 19, 1984 in Passaic, N.J. , he was... View Obituary & Service Information

The family of Daniel Listmeier created this Life Tributes page to make it easy to share your memories.

Listmeier, Danny, 33, of Clifton, entered into eternal rest on...

Send flowers to the Listmeier family.