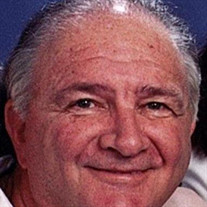 Donald Deran Chopoorian, 82, passed away Aug. 1 at his home in Mt. Arlington. The ultimate optimist, Don loved his wife Rita, family, friends and career. Born in Jersey City to parents Deran and Anna, Don grew up with his sister Jeanette in North Bergen, attending Weehawken High School. He loved sports, especially basketball, performed in the marching band and founded his high school musical group, the Skylarks. Don also worked summers on the Seaside Heights boardwalk. After attending Rutgers University for two years, Don went into the family business started by his father Deran in 1939, making and selling religious statues and articles. He also married his high school sweetheart Rita (Scarpetta) on Nov. 1, 1958, and they would be together for more than 62 years, raising two children. While working for his father, Don expanded a small sideline of the business – imprinted advertising specialties – selling calendars, pens and other giveaways to local shops. Once, after he called on a national carpet business, his father told him they didn’t sell to big companies. Don whispered to himself, “Someday, I will.” He soon did. A natural salesman, Don started selling to large companies, including A-P-A Transport, Hudson City Savings and State Farm Insurance. His family company, Supreme Specialty Advertising (son Donald worked with him for some years), served many national, regional and local clients before closing in 2019. Don gained his industry’s respect and served as board member and president of SAAGNY, an industry trade group. He counted his many clients as friends. “Most products are similar or often the same,” he often said. “But if people like you, they’ll buy from you.” Don lived a big life, entertaining friends and travelling often with Rita. He loved rolling the dice in many casinos, visiting the Meadowlands Racetrack and playing cards. He enjoyed food – especially bagels and pizza – rooted for the Yankees and Giants, was a talented piano player and a devoted racquetball player and swimmer. His favorite song was the fitting, “Celebration” by Kool & The Gang. Deeply religious, Don attended daily Mass for much of his life and supported various Catholic churches and Holy Cross Armenian Church of Union City. Family meant the most to him. “Poppy” loved taking his granddaughters for ice cream and was so proud when they succeeded in life. Each day, he’d say, “Good morning, girls” and “Good night, girls” to a picture of the four of them. Though he struggled with health in his final years, Don never lost his optimistic outlook and love of life. Don is survived by his beloved wife Rita, son Donald, daughter Lisa and son-in-law Jack DeVries, sister Jeanette Der Hagopian, and granddaughters Jessica, Alyson, Lara and Anya. Funeral services are private.

Donald Deran Chopoorian, 82, passed away Aug. 1 at his home in Mt. Arlington. The ultimate optimist, Don loved his wife Rita, family, friends and career. Born in Jersey City to parents Deran and Anna, Don grew up with his sister Jeanette in... View Obituary & Service Information

The family of Donald D. Chopoorian created this Life Tributes page to make it easy to share your memories.

Send flowers to the Chopoorian family.