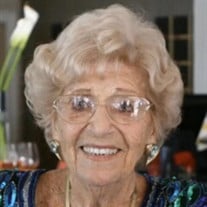 Fitzgerald, Eleanor Jewel (nee Mohrle) 104 years old. She was born on Saturday February 19, 1916. She went home to be with Our Lord on Sunday May 3, 2020. Those that went home before her are her beloved husband of 65 years, Andrew Francis Fitzgerald, her first born Loretta Jewel Fitzgerald Caldo, and sons-in-law John Temperato and Jack Rosenstein. She leaves behind six daughters, 19 grandchildren and 28 great grandchildren. Sorely missed by her surviving daughters, Andrea DiDomenico (husband Tony), Colleen Temperato, Mavourneen Slufik (husband Steve), Eleanor Hofker (husband Charles [Beau]), Siobhan Martinez (John Barbu), Beverly (Briget) Rosenstein, also Loretta's husband Robert Caldo. Eleanor worked in the 5 Corner Diner, owned by her parents Walter and Juia (Kocsis) Mohrle, in her early teens. She was on the WODA radio station at the age of 16, singing Jazz in her own 15 minute show. Her love of horses was the main reason she became an equestrian instructress at 18 years old, and specialized in Dressage. She also became a hairdresser in 1937 and would do a wash, cut and set for $1.00. She was an Avon and a Tupperware representative, breaking all records in sales, while raising her daughters. At the age of 51 she opened the Ella Fitzgerald Real Estate Agency on E 33rd St in Paterson. It was a very successful business, her ability to speak seven languages was a plus as a broker. She scaled back working at 88 years old and finally retired at age 93. Due to the health crisis, a forthcoming Memorial Service will be announced at a later date. In honor of Eleanor Fitzgerald, donations can be made (in her name) to St Joseph’s Home for the Aged, Little Sisters of the Poor, 140 Shepard Lane, Totowa, N.J. 07012 or St Jude's Hospital for Children. Arrangements by Marrocco Memorial Chapel – 470 Colfax Avenue, Clifton.

Fitzgerald, Eleanor Jewel (nee Mohrle) 104 years old. She was born on Saturday February 19, 1916. She went home to be with Our Lord on Sunday May 3, 2020. Those that went home before her are her beloved husband of 65 years, Andrew Francis... View Obituary & Service Information

The family of Eleanor Jewel Fitzgerald created this Life Tributes page to make it easy to share your memories.

Send flowers to the Fitzgerald family.