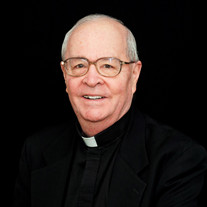 Father James R. Hertel, 79, of Clifton passed away on November 6, 2016. Beloved son of the late Russell & Helen Hertel and his beloved miniature schnauzer. “DOC” Father James R. Hertel, was pastor of Our Lady of Consolation Parish in Wayne, from 1995 to 2001, when he retired from ministry in the Diocese and resided in Clifton. Father Hertel, who received a doctorate in Cannon Law from The Catholic University of America, Washington, D.C., in 1968, was diocesan judicial vicar from 1973 to 1995. Earlier, he had served as Defender of the Bond, and as vice officialis and secretary of the Diocesan Tribunal. He was a member of the Canon Law Society of America and he organized a convention for the Eastern Regional Conference of Canonists in 1986. Born in Binghamton, N.Y. on Nov. 15, 1936, he was baptized and educated in the Evangelical Lutheran Church and was graduated from Harpur College of the state university system of New York. He was received into communion with the Roman Catholic Church on Oct. 31, 1957 in Our Lady of Good Counsel Church, Endicott, N.Y. He completed theological studies at St. Joseph Seminary, Teutopolis, Ill., where he was ordained to the priesthood in St. Francis of Assisi Church, Teutopolis, Ill., on Jan. 10, 1965 for the Order of the Blessed Virgin Mary of Mercy, also known as the Mercedarians. He was incardinated as a priest of the Paterson Diocese in 1971. He marked the golden anniversary of his ordination in 2015 and he assisted at various parishes in the Diocese of Paterson on weekdays and Sundays, especially St. Paul, Prospect Park, Our Lady of the Holy Angels in Little Falls, and Assumption, Morristown. Funeral mass will be held on Friday 10:30 AM at Saint Paul RC Church. Prospect Park. Interment Vestal Hills Memorial Park, Vestal, NY. Visiting Thursday 3-8 PM with a prayer service at 8 PM at the Marrocco Memorial Chapel 470 Colfax Avenue Clifton

The family of Rev. James R Hertel created this Life Tributes page to make it easy to share your memories.

Father James R. Hertel, 79, of Clifton passed away on November...

Send flowers to the Hertel family.