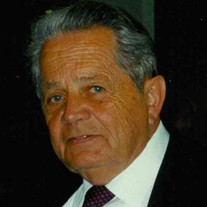 Fedun, Jaroslaw, 88 of Clifton, New Jersey passed away peacefully at home on August 4, 2019 surrounded by his family. Jaroslaw was the son of the late Ivan and Sydonia Fedun; brother of the late Orest and Levko; beloved husband of 63 years... View Obituary & Service Information

The family of Jaroslaw Fedun created this Life Tributes page to make it easy to share your memories.