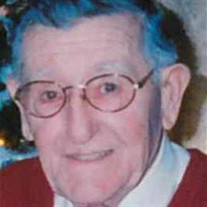 Agnolet, John 97 of Clifton, passed away peacefully on January 6, 2020, surrounded by his loved ones at home. John was born on December 3, 1922, in Sarmede in the province of Treviso, Italy and immigrated to the United States in 1936, settling in the Delawanna area of Clifton. In 1943, John enlisted in the Army Air Forces. He proudly served as a Sergeant during World War II in France, Italy and North Africa lending his skills and talents to deploying equipment in support of the war effort. He was honorably discharged in 1945 from the 1050th Army Air Forces Base Unit in Kearns, Utah. He married Lucia “Fides” Milanese in April, 1947 and raised two children. He worked as a housepainter with his brother-in-law Floyd Tomé and as a maintenance man for the Elmwood Park School System. After his retirement, he enjoyed the simple things in life: his family, fixing things, and growing tomatoes in his garden. He was a parishioner of Sacred Heart R. C. Church. John was a devoted husband and loving father. He always had a smile on his face, and no matter the circumstances, he focused on the good things in life. Nothing seemed to faze him. He would often say “Sempre Avanti” … “Always Forward.” John was extremely generous with his time; always helping others without question. He would arrive in his 1967 Pontiac full of tools. No job was impossible. He was highly creative and could quickly improvise a repair given the materials at hand. John was a master woodworker. He could refinish a discarded piece of furniture and turn it into a cherished heirloom. He is survived by his daughter Debra Agnolet of Clifton, New Jersey, his son Dr. Glenn Agnolet of College Station, Texas, his brother Mr. Richard (Rose) Agnolet of Lyndhurst, New Jersey, brother-in-law Mr. Anthony (Janet) Milanese of Garner, North Carolina, and many loving nieces and nephews. John was preceded in death by his parents Giuseppina (née Feltrin) and Frank Agnolet, and his sister Mrs. Floyd (Mary) Tomé and brother Mr. Attilio (Muriel) Agnolet. In lieu of flowers, a memorial donation may be made to St Jude Children’s Research Hospital to continue the love and caring he had for all children. Funeral from the Marrocco Memorial Chapel 470 Colfax Avenue Clifton on Thursday, January 9th, 2020 at 9:15 AM followed by a Funeral Mass at Sacred Heart RC Church at 10 AM. Entombment will be at Calvary Cemetery. Visitation: Wednesday, January 8th, 2020 from 2-4 and from 7-9 PM.

Agnolet, John 97 of Clifton, passed away peacefully on January 6, 2020, surrounded by his loved ones at home. John was born on December 3, 1922, in Sarmede in the province of Treviso, Italy and immigrated to the United States in 1936, settling... View Obituary & Service Information

The family of John Agnolet created this Life Tributes page to make it easy to share your memories.

Agnolet, John 97 of Clifton, passed away peacefully on January...

Send flowers to the Agnolet family.