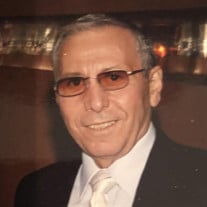 Louis “Lou” Bianchi, 79, passed away on October 4, 2020. Beloved husband of Lucy (DiPasquale) for 31 years. Loving father to Lisa Klatt and husband Bill, Robert Bianchi and wife Angela. Proud grandfather to Kayla, Kylie, Mia, Keira and Robby. He is predeceased by his parents Catherine and Louis Bianchi and his cherished Godmother Lee Petroska. Lou was born and raised in Hoboken by his mother Catherine, loving grandparents Agnes and Peter Montleone and beloved Uncles George and Anthony Montleone. He moved to Palisades Park in 1968 where he raised a family and owned his own barber shop; Lou’s and later renamed Hair or There. Fondly known by all in town as “Lou the Barber”, he was affectionately remembered by his customers for his tradition of sharing shots of Sambuca with them for Christmas. Over his 25 years in town he had given many their first haircut to their haircut on their wedding day. In 1993 he retired and he and Lucy moved to Arizona to fulfill his lifelong dream. Lou was an avid Frank Sinatra fan. He loved to listen to music, attending concerts and still had his original collection of vinyl records. He was quite the dancer and would proudly display his dancing skills at many social events. He was known as a sharp dresser and was voted Best Dressed in High School which was a label he proudly carried with him through most of his life. He had a passion for traveling, experiencing different cultures and enjoyed collecting items from all the many countries he visited. He particularly enjoyed traveling to Spanish speaking countries where he attempted to communicate using the Italian his grandmother taught him as a child, although the translation didn’t always work out for him. He was a collector of antique guns and his hobby was to go to the shooting range. He had a love of life, a big personality, was outgoing, and made friends wherever he went. He was loved by many and remembered by those who knew him as kind, a gentleman, a class act. Though he struggled with health in his final years, as one of his favorite Frank Sinatra songs he will always be remembered as doing it “My Way”. Funeral Service on Friday, October 9, 2020 at 11:30 at Marrocco Memorial Chapel, 470 Colfax Avenue, Clifton, NJ. Interment at Madonna Cemetery in Fort Lee. Visitation will be held on Thursday October 8, 2020 from 6-8 p.m.

The family of Louis Anthony Bianchi created this Life Tributes page to make it easy to share your memories.

Send flowers to the Bianchi family.