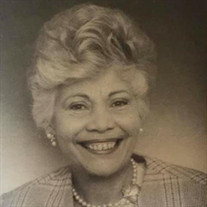 The mortal remains of the former Paterson Councilwoman, María Magda O’Keefe, will arrive in New Jersey this Tuesday, August 18, 2020. Her wake will be Thursday, August 20, 2020 at Marrocco Memorial Chapel, 470 Colfax Avenue, Clifton, NJ. The burial will take place on Friday, August 21, 2020. There will be a mass at St. John the Baptist Cathedral, 381 Grand Street, Paterson, NJ at 9:30 a.m. After mass, there will be a funeral procession through the Fifth Ward, a sector that María Magda represented in the Paterson City Council between 1984 and 2000. The funeral procession will make three stops; one at Paterson City Hall, the Hispanic Multi-Purpose Service Center, 911 East 23rd Street and 673 Market Street. Maria Magda will receive a Christian burial at Calvary Cemetery, 50 McLean Blvd., Paterson, NJ. María Magda was born on July 22, 1938 in Las Piedras, a municipality in the central-eastern region of Isla del Encanto. Her parents were Guadalupe López and Rosalina Cruz. The Puerto Rican leader died on Monday, August 10, 2020 in Rio Grande, Puerto Rico surrounded by her loved ones. María Magda had two children, Debra Ann Martínez and John M. Morales, now deceased, four grandchildren and four great-grandchildren. At the end of her days, María Magda lived in Coco Beach, Río Grande, along with her daughter Debra Ann, her son-in-law, Harry Martínez, her grandson Lorenzo Martínez, and his husband, Daniel Yarce. Her place of birth was always her personal seal. She was very proud to be Puerto Rican and that motivated her in part to grow in politics and to achieve a space for Latinos; especially Puerto Ricans to speak and be heard; and so she did. In addition to her important role in Paterson and New Jersey politics, one of Maria Magda's greatest accomplishments was the Hispanic Multi-Purpose Service Center (Centro Hispano). The Centro Hispano which celebrated 45 years of founding; offers social, educational and recreational services, etc. to the residents of Paterson and Passaic County. María Magda was licensed as a Social Worker and Counselor on Domestic Violence. She studied nursing at the Old Nursing School at Concepción Hospital in San Germán, Health Education at Columbia University in New York, and Master Hairdresser Academy, Passaic New Jersey. The renowned leader was the first Latina to be elected as President of the Paterson City Council in 1988. Maria was also Deputy Mayor of Paterson under the administration of Mayor Lawrence (Pat) Kramer, Administrator of the Planning Division of the Mayor's Office, Coordinator of Services for Hispanics and in charge of the Nutritional Program for the Elderly. Additionally, Maria Magda was a Commissioner of the Paterson Board of Social Services and Board of Health, a Member of the Board of St. Joseph’s Hospital and Medical Center. She was active in the organization “Women in Government,” the Paterson Chamber of Commerce, the Columbia University Panel of Health, and the Boy Scouts of America Board of Directors and many others. She also chaired the Paterson Great Falls Committee and in 1976 the Paterson Puerto Rican Parade. During her lifetime, the former Councilwoman received multiple awards including one from the United States Department of Defense, the Irish Cultural Society, the Italian Society and the New Jersey Assembly. She left her famous beauty salon behind to build an electoral force from the Hispanic Center that would change the socio-political destiny of the City of the Great Falls. Maria Magda O’Keefe was a great woman who left a lasting legacy in New Jersey history. She is an example for the new generations and conscience for a community that currently needs to rescue its heroes and historical deeds. Rest in peace! You were great in life, now you are immortal and you live alongside the greats in the Gran Yunque, altar of the Puerto Rican Homeland.

The family of Maria Magda O'Keefe created this Life Tributes page to make it easy to share your memories.

The mortal remains of the former Paterson Councilwoman, Mar&#237;a...

Send flowers to the O'Keefe family.