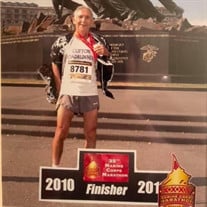 Marinus (Matt) Lalumia, 81, of Clifton, passed away on July 11, 2021. Beloved husband to Vivian (Granito) Lalumia. Loving father to Lisa Kranis and her husband Jeffrey of Randolph, Marinus Jr. and his wife Carol of Little Falls, and Karen Testa and her husband Jason of Hackettstown. Devoted grandfather to Alexander and Jordyn Kranis, Charlie Lalumia, and Luke, Riley and Jake Testa. Son of the late Joseph and Grace Lalumia, son-in-law of the late Lucy and Bruno Granito, and dear brother to the late Josephine, Marilyn and Joseph Jr. Matt was born in Lodi, New Jersey. He was a proud Veteran, having served in the Marine Corps from 1958-1962. Matt lived in Clifton with his wife, Vivian, of 57 years, where he was a perpetual volunteer. He was co-founder and proud member of the Clifton Roadrunners. Matt was the past President of the Northern Division Little League. He was the President of the Men’s Council of the Girl’s Club of Clifton. Matt was also past president of the Clifton chapter of the New Jersey Jaycee’s, where he was selected as The Outstanding Chapter President of the Year in 1976. Matt’s influence included multiple community charitable events, such as a 48-hour Softball Marathon for Cystic Fibrosis and a Bingo program to support the Girls Club. His selfless work led to his selection as Clifton’s Man of the Year in 1976. Additionally, Matt was the co-owner of KLI in Paterson, where he and his son have built and grown their business for 35 years. Matt enjoyed the Yankees and he loved to garden, but his passion in life was running. At 38 years old, Matt was not only inspired to take up the sport, but to compete at the highest level and mentor others to elevate their potential. For 41 years, he was what many of his competitors measured themselves against. Matt ran over 30 Marathons, taking his talents to New York City, Boston, Philadelphia, Quebec, and the Wineglass Marathon in Corning, NY. The race he was most proud to run was the Marine Corp Marathon in Washington DC, where he finished first in his age group (70-74) in 2010. Matt’s legacy also includes building a team that won the USATF Master’s division National Championship in 2017. More than anything, Matt cherished the comradery and the community that the running world offered, and he enjoyed many, many great friendships over the years. The only thing that exceeded his love of running was his love for his family. Matt’s family will always remember him as a role model and a hero, not just for his service and the work he did for the community, but also for his patience and his work ethic. He was happiest when he was around his beloved wife and children, highlighted by countless family dinners shared with his grandchildren, from Lasagna nights to 7 course meals in Sicily. He loved to watch his grandson Alex play hockey and his granddaughter Jordyn compete in gymnastics and Track and Field, and even coached his grandson Charlie’s track team as well. One of his favorite yearly events was representing the Marines at Luke and Riley’s Veteran’s Day assembly at school, and loved playing with his energetic youngest grandson Jake. He treated the spouses of his children as if they were his own. Matt touched so many lives and everyone he met became family. His smile and gentle soul will never be forgotten. In lieu of flowers, the family is asking for donations to the Boy’s and Girl’s Club of Clifton and the Clifton Veterans Avenue of Flags. Visiting at the Marrocco Memorial Chapel – 470 Colfax Avenue, Clifton on Thursday from 7 PM to 9 PM and Friday from 2 PM to 4 PM and 7 PM to 9 PM. Funeral Mass on Saturday at St. Paul RC Church at 9 AM. Interment at Mt. Hebron Cemetery.

The family of Marinus Lalumia created this Life Tributes page to make it easy to share your memories.

Send flowers to the Lalumia family.