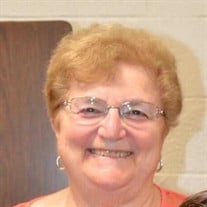 Vogt, Mary Jane (Korb), 79 of Wayne passed away on December 5, 2020. Beloved wife of the late Arthur Vogt. Loving mother to Kathleen & her husband Victor Cozzone, Peter Vogt and his wife Donna, Carolyn & her husband William Kerwin & Kristen & her husband Charles Kawas . Sister of Lawrence Korb, Margaret Bailey, Michael Korb, and Joseph Korb. Grandmother to Joseph Vogt, Kaitlyn Kerwin, Liam Kerwin, Aidan Kerwin, Ryan Kawas ,Alexander Kawas & Victor Cozzone. Mrs. Vogt was born in New York City and lived the last 48 years in Wayne. She was a parishioner of Our Lady of the Valley RC Church in Wayne. Funeral Service on Friday 10 AM at Marrocco Memorial Chapel 470 Colfax Avenue, Clifton. Interment Christ the King Cemetery, Franklin Lakes. Visiting Thursday 4 – 7 PM. In Lieu of flowers donations can be made to Cozies 4 Chemo, http://cozies4chemo.org/index.html. On New Year’s Day in 1941, Mary Jane Korb was born to parents Katherine and Joseph. Their first daughter and second of what would become 5 children – Larry, Peggy, Mike, and Joey. By all accounts, Mary Jane was a good kid, excelled in school and had many friends. After graduating High School, she worked as a Secretary. In her late teens, Mary Jane met Arthur Vogt. When Artie returned from the Philippines serving our country in the Coast Guard, they tied the knot on November 25, 1961, just a month shy of her 21st birthday. They settled in a home in Woodhaven, Queens and nine months later, they welcomed their daughter, Kathleen, the first of 4 children. Within 7 years, Mary Jane was a mother of 3 – Peter was born in 1965 and Carolyn in 1968. While being a mom and a homemaker, Artie worked full time AND went to college in the evening. After a long day of being a mother and after the kids went to bed, Mary Jane would type Artie’s papers. For that she should have earned a degree right along with him! In 1971, Mary Jane and Artie moved to Wayne, NJ and in 1974 welcomed 4th child Kristen. Artie worked full time and Mary Jane kept a well-run household. The couple was active in the community and with their church. Mary Jane played in a Volleyball league, ran the craft fairs at church, helped run the annual Oktoberfest dinner and much more. One of her favorite memories was when she won tickets to see the Pope at Yankee Stadium in 1979. Their children did well in school and Mary Jane was especially proud that all went to and graduated college. When the youngest child was in middle school, Mary Jane went back to work. An administrative assistant putting her old skills to work at Concept Graphics and then for Cambridge Square. She loved having something of her own that did not involve the house or the kids. She made good friends that she kept in touch with until she passed. When Artie suffered a stroke in 1992, Mary Jane gave all of that up to care for him until he passed in 2005. During that time, she was also “Grandma’s childcare” – tending each weekday to 3 of her 7 grandchildren – Joseph born in 1995, Kaitlyn in 1998 and Liam in 1999. She deservedly “retired” from childcare after Liam entered Kindergarten and then became a Grandma 4 more times – Victor was born in 2001, Aidan in 2006, Ryan in 2007 and Alex 2010. After Artie’s passing, Mary Jane once again had the time to do things that she loved – spending time with her grandchildren, sewing, embroidering, travelling (Germany, Switzerland, Italy, Portugal, River Cruises, Alaska, Ireland just to name a few), Friday breakfasts at the diner with friends, weekly sewing circle and annual sewing weekends. Mary Jane was a premiere crafter of sewn and embroidered items. Throughout her life, Mary Jane made her kids and grandkids Halloween costumes, matching outfits for the girls and their dolls, and regular clothes. Her craft grew to include T-shirts, “lovies”, quilts, towels, blankets, tote bags. You name it. Everyone – kids, grandkids, siblings, friends, nieces and nephews and their kids – got something with their name on it. Most of all, Grandma Mary Jane adored her grandchildren. Each one was special to her in their own way. In 2018, Mary Jane was diagnosed with breast cancer. She faced that disease the way she faced her life – with determination, strength, and positivity. On December 5, 2020, Mary Jane passed in her home – just the way she wanted. Please go to: https://youtu.be/W1a0bqTfvKM

The family of Mary Jane Vogt created this Life Tributes page to make it easy to share your memories.

Send flowers to the Vogt family.