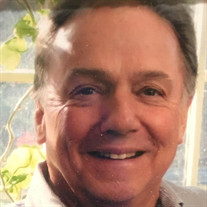 DeMarrais, Michael Francis of Woodcliff Lake, NJ- Passed away on January 21, 2021. He was the Beloved Husband of Carmen (nee: Arias) his wife of 55yrs, who was by his side, when he died peacefully, after a 9 year battle with cancer and complications of surgery. Michael was a partner in the Hackensack law firm of Alampi & DeMarrais, and the Zoning Board Attorney in Ridgefield Park, until his death. He was born on 1/17/41 & was predeceased by his parents Joseph A. & Genevieve (nee Hanigan) DeMarrais, raised in Bogota, and graduated from Bogota High School. His accomplishments there included earning the rank of Eagle Scout, and making Varsity in basketball, baseball & football. There were 2 passions in his life, both starting with C- First, his love for his wife Carmen, and the Second, his passion for Colgate University (Class of '62) - well known to everyone. It was there that he earned his varsity C in wrestling in 61' & 62" He was a graduate of Rutgers University Law School Newark ('65) and clerked for Judge Kilkenny, NJ Superior Court. Appellate Division. Michael went on to serve as Municipal Judge in Woodcliff Lake and Montvale & was also a prosecutor in Woodcliff Lake. Over the years his athleticism turned to tennis, enjoying membership in Oritani Tennis Club, Hackensack, Hackensack Golf & Country Club, Oradell, Tenafly Tennis (Outdoor Club), and Upper Ridgewood Tennis Club. Bermuda & Jamaica were his favorite beach & tennis destinations. Michael brought Sunshine to rainy days, and will always be remembered for his beautiful intellect, and most importantly, for his integrity. He was an aggressive litigator, and had the ability to simplify the arguments in the most complicated cases. Survivors include, his Sister, Marion Fischer of Somerset; and Brothers Paul, West Redding, CT, Kevin, and Sister-In-Law, Marilyn of Teaneck, Maria T. Williams, Sister-In-Law, predeceased Henry A, Brother-In-Law, Calabasas, CA as well as 14 Nieces & Nephews. Due to Corona virus restrictions, interment at Mary Rest Cemetery, Mahwah on 1/29/21 was private. Arrangements were made through Marrocco Memorial Chapel, Clifton, and St, Gabrielle's Catholic Church, Saddle River, with a Celebration of Life Memorial Service-to be held at a future date. In lieu of flowers, memorial scholarship donations for financial need, can be sent to: Colgate University PO BOX 313 Canajohaire, NY 13317 please make check Payable to Colgate University. MEMO LINE: Michael F DeMarrais Class of 62.

DeMarrais, Michael Francis of Woodcliff Lake, NJ- Passed away on January 21, 2021. He was the Beloved Husband of Carmen (nee: Arias) his wife of 55yrs, who was by his side, when he died peacefully, after a 9 year battle with cancer... View Obituary & Service Information

The family of Michael DeMarrias created this Life Tributes page to make it easy to share your memories.

Send flowers to the DeMarrias family.