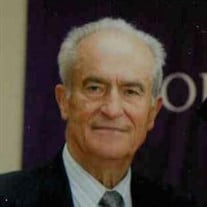 Michael Moczula, 90, of Clifton, died on December 7 in the presence of his loving family. He is survived by his beloved wife, Olga (Kuzyk) Moczula, his daughter Martha, his son Boris and his wife Maureen Varley; his grandchildren: Andrew and his wife Caitlin, Mary and her fiancé Matthew Letner, and Timothy and his wife Kimberly; and his great grandchildren, Ava and Rose. Michael was predeceased by his parents Gregory and Anna (Toporowycz), his brothers William and Gregory, and his sister Mary. Michael was born in 1931 in the village of Chernykhivtsi in Ukraine. He emigrated from Europe to the United States in 1949, settling in Passaic before moving to Clifton, where he resided for 65 years. He married Olga in 1954, this past September marking 67 years of their marriage. He worked as a chemical operator at Hoffman La Roche in Nutley for over 30 years until his retirement. He was a parishioner at St. Nicholas Ukrainian Catholic Church in Passaic and a member of the church choir. Michael also was a long time member of the Ukrainian Chorus Dumka of New York, performing at various venues, including a historic homecoming concert tour of cities in Ukraine in 1990. He also served as the chorus’s administrative director for many years. He was active in the PLAST Ukrainian scouting organization at both the local and national level, and a dedicated member of the Ukrainian scouting fraternity Lisovi Chorty. Michael enjoyed tennis, traveling in America and internationally with his family and close friends and spending summers in Cape May, especially when accompanied by his grandchildren. He often reminisced about his experiences and friendships forged during his teenage years in a Ukrainian displaced persons camp in Mittenwald, Germany. He was proud of and celebrated his Ukrainian heritage. He was a kind, gentle man who loved his family and routinely went out of his way to provide assistance to anyone in need. “Unable are the loved to die, for love is immortality.” Emily Dickinson Visitation will take place on Monday, December 13 from 9:00 to 10:30 AM at the Marrocco Memorial Chapel, 470 Colfax Avenue, Clifton, followed by an 11:00 AM funeral Mass at St. Nicholas Ukrainian Catholic Church, 217 President Street, Passaic. Interment at St. Andrew Ukrainian Cemetery, 280 Main Street, South Bound Brook. The family requests that, in lieu of flowers, donations be made in Michael’s memory to St. Nicholas Ukrainian Catholic Church.

Michael Moczula, 90, of Clifton, died on December 7 in the presence of his loving family. He is survived by his beloved wife, Olga (Kuzyk) Moczula, his daughter Martha, his son Boris and his wife Maureen Varley; his grandchildren: Andrew and... View Obituary & Service Information

The family of Michael Moczula created this Life Tributes page to make it easy to share your memories.

Michael Moczula, 90, of Clifton, died on December 7 in the presence...

Send flowers to the Moczula family.