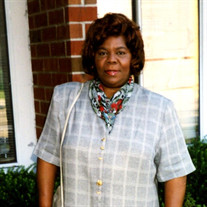 Phyllis Beverly Barclay’s spirited personality was revealed to the world on April 14th, 1947 to Jabez David Barclay and Ada Hanson Barclay. The 3rd child of what would be later become a total of 11 children born to the couple. Phyllis was a person with immense strength and a quiet grace all at once. She was soft spoken, yet assertive, self-assured and strong in her beliefs. Being born with so many siblings she knew it was essential to stand out in the crowd and be heard and that is what she did. She did this with humor because Phyllis was always very funny and quite witty. She understood the importance of kindness and generosity and extended this into her professional life. She was educated in Jamaica at the college level and after she immigrated the United States continued her education in nursing. She worked at Saint Mary’s Hospital in Passaic New Jersey for approximately 20 years until she retired. One thing that she was most proud of in her life was being a mother. She had two beloved sons Jeremy and Donald. Jeremy departed before his adoring mother and far too soon on September 12, 2001. She grieved his passing until her last breath but continued to live life with the grace only Phyllis could have. She continued to dress impeccably with not a hair out of place and her makeup was always done. She took pride in the way she looked and it showed. She said goodbye to her earthly body on November 2, 2017. She leaves behind a beloved son Donald Barclay; siblings Lilleth Scott, Cherry Bailey, Norma Hamilton, Marjorie Barclay, Ezekiel Barclay, Patsy Barclay, Errol Barclay, Patricia Anglin, Delroy Barclay, Carol Sinclair and a number of nieces and nephews. The one thing that brings the family solace during this time was her continued and enduring faithfulness. Visiting at Marrocco Memorial Chapel 470 Colfax Avenue, Clifton on Friday from 9 AM to 11 AM. Funeral Service at 11 AM.

Phyllis Beverly Barclay&#8217;s spirited personality was revealed to the world on April 14th, 1947 to Jabez David Barclay and Ada Hanson Barclay. The 3rd child of what would be later become a total of 11 children born to the couple. Phyllis... View Obituary & Service Information

The family of Phyllis Barclay created this Life Tributes page to make it easy to share your memories.

Send flowers to the Barclay family.