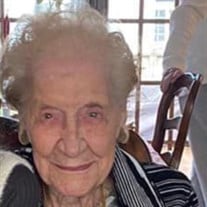 Genchi, Rose M. (Di Donna), 97 of Clifton passed away on March 20, 2022. Beloved wife of the late Anthony “Tom” Genchi. Loving mother to Joseph & his wife Sherry, Nicola “Nick” & his wife Carol and Anthony Jr. & his wife Marianne. Grandmother to Kimberly Carrubba & her husband Mike, Kari Valcich & her husband Mark, Joseph Jr., Nicholas & his wife Ashley, Michael & his wife Kristen, Kristan Kehoe & her husband Patrick, Marissa Papamarkos & her husband Jonathan and Anthony III & his wife Amanda. Devoted great grandmother to Dylan, Savanna, Mila, Valentina, Nicholas, Samantha, Matthew, Anthony, Chase, Jake, Nicholas, Gianna, Ava, Teo and Nash. Dear sister to Theresa Rosa and the late Joseph Di Donna. Rose was born on February 14, 1925 to Nicola Di Donna and Josephine (Cattanese). She graduated Clifton High School Class of 1943, and married “Tommy” on May 5, 1946. She raised her three sons and worked alongside her husband as owner of Madison Mill Works in Clifton until they retired in the early 80’s. After that they enjoyed many years vacationing at Sea Side Park, NJ in the summer and spending winter months in Hollywood, FL until Tommy’s death in 2009. She was the matriarch of a very large extended family and loved having large Italian meals on Sundays and holidays, especially her Christmas Eve Feast. Even at 97 years old she still insisted on living very independently on her own. She would have it no other way!! Funeral from the Marrocco Memorial Chapel – 470 Colfax Avenue, Clifton on Thursday at 9:15 am followed by a Funeral Mass at Sacred Heart RC Church at 10 am. Interment at Calvary Cemetery. Visiting on Wednesday from 4 pm to 8 pm. In lieu of flowers, please make a donation to St. Jude Children's Research Hospital.

The family of Rose M Genchi created this Life Tributes page to make it easy to share your memories.

Send flowers to the Genchi family.