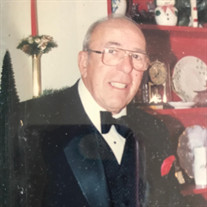 Salvatore Joseph Latteri, 94, of Clifton, entered into eternal rest on Sunday. He was the proud and successful proprietor of the Dayton Restaurant, ( formerly Dayton Bar and Grill) a family establishment in Botany Village, Clifton, for 48 years. Mr. Latteri also served in the Navy during World War ll. and was a member of the American Legion. Born in Clifton, he lived his entire life there. He was the epitome of a family man, whose greatest joy was spending time with his loved ones. Although a self-made man, he judged his wealth not in possessions, but in the richness of having a loving family. He had a heart of gold, and always gave freely, faithfully paying his blessings forward to houses of worship, organizations, and strangers in need. Prior to his lengthy illness, he enjoyed daily visits to the Scoles Ave Clifton Jewish Y to spend time bonding with his buddies in the sauna and pool. After his retirement, he and wife Jean became snow birds, spending the winter months in their condo in Hallandale, Florida. Known for being an amazing chef, he hosted " Sal's Annual Picnic" for their devoted Floridian friends. Mr. Latteri was the son of the late Anthony Latteri and Kate Mugavero-Latteri. Loving brother of the late Rose and Joseph, and proud cousin of the late Bishop Francis Mugavero of Brooklyn. Mr. Latteri is survived by his devoted and loving wife Jean Latteri of Woodland Park, NJ. Adored father to Anthony Latteri of Valley Cottage. NY, and beloved friend Jennifer Pirovano, William Latteri and wife Antoinette of Randolph, Cathy Latteri-Burke and husband John of Woodland Park, Alana Latteri-Pollastro and husband Jerry of Clifton. He is survived by his treasured grandchildren Erin Burke-Saba and husband Rodrigo, Matthew, Brandon, Samantha and Christopher Latteri, and great grandchild Addison Saba. Mr. Latteri was pre-deceased by his loving grandsons Zach Latteri of RiverVale. and Daniel Listmeier of Clifton. Mr. Latteri was a parishioner and proud supporter of St Clare Church in Clifton. Visiting Wednesday 4-8 PM at the Marrocco Memorial Chapel 470 Colfax Avenue Clifton. Funeral mass will be held on Thursday at 10:30 AM at Saint Clare RC Church Entombment Calvary Cemetery. In lieu of flowers, please consider a donation to St. Jude Children's Hospital, or Relay for Life in memory of Zachary Latteri.

Salvatore Joseph Latteri, 94, of Clifton, entered into eternal rest on Sunday. He was the proud and successful proprietor of the Dayton Restaurant, ( formerly Dayton Bar and Grill) a family establishment in Botany Village, Clifton, for 48 years.... View Obituary & Service Information

The family of Salvatore Latteri created this Life Tributes page to make it easy to share your memories.

Send flowers to the Latteri family.