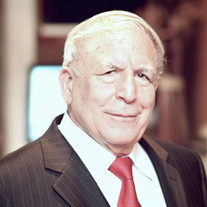 Fiorello, Sebastian “Sam” was born in Newark NJ during The Great Depression to Sicilian parents. He was the youngest of his siblings and learned to speak Sicilian Italian fluently. Sam's father died when he was seven years old. He was a good student and also raised carrier pigeons, teaching himself how to play the piano, excelling in art/drawing/woodshop/machine shop and actively participating in the debating team/club at Newark Central High School. While still in high school, he got a job at a fruit and vegetable distributer, "down-neck" as he called it (i.e Ironbound section of Newark). Sam was very energetic and claimed that he was driving a delivery truck at age 14. He graduated early and married Carmela. After their son and daughter were born, they bought a house in Clifton. Sam worked in the embroidery manufacturing industry performing and becoming proficient at nearly all of the required tasks including developing new and efficient ways of doing his job. He apparently was self-taught to do almost everything except for the power boating course that he took at the NJ Power Squadron. He was very good at cutting hair and gave haircuts to his children and grandchildren. He knew a lot about carpentry, masonry, plumbing, automotive repair, electrical wiring, troubleshooting, first aid, moving, photography, etc. He tackled many jobs that most people would leave to contractors with heavy equipment. He never wasted anything. He was very innovative and resourceful at home and on the job. He would have been the best possible person to have with you if you were shipwrecked on a desert island. He was a master at negotiating a lower price. He was always trying to improve everyone and everything. He often said things like: That’s the worst thing you could do. -and- Here is a better way of doing that. He was the master of the off-the-cuff humorous quip. "I could have been a doctor but I didn't have the patients (patience)." He was calm and quiet and didn't even get angry if someone was arguing, insulting or yelling at him. He loved to keep his car in showroom condition. Sam loved his grandchildren and attended many of their programs. He traveled extensively the USA by car and to Italy. Sam often visited relatives and always brought a food gift to share. In this way, he kept the family together. Sam loved to fish and crab at Sandy Hook. He loved fish, Italian food and chocolate. After his wife died, his employer closed the shop. He then helped his boss liquidate the equipment. He also served as a part time consultant to some of his friends in the business. Sam had a strong faith in God and could always be called upon to pray at meals, at gatherings, and at someone's bedside for healing. For most of his life, he faithfully attended non-denominational home churches twice a week. Several years after his wife passed away, mutual friends introduced him to the beautiful Connie. They were perfect for each other and they eventually married, living in Fairview, Westwood and finally Clifton. He is survived by his wife Connie (Simpson) Fiorello; his children, Samuel Fiorello & his wife Catherine and Irene Bjorndal & her husband Paul; grandchildren John, David, Benjamin, Christopher, Elizabeth, David, Sharon, and Michael. He is also survived by fifteen great grandchildren. Funeral from the Marrocco Memorial Chapel – 470 Colfax Avenue, Clifton on Friday at 10 AM. Interment at East Ridgelawn Cemetery. Visiting on Thursday from 2 PM to 4 PM and 7 PM to 9 PM.

Fiorello, Sebastian &#8220;Sam&#8221; was born in Newark NJ during The Great Depression to Sicilian parents. He was the youngest of his siblings and learned to speak Sicilian Italian fluently. Sam's father died when he was seven years old. He... View Obituary & Service Information

The family of Sebastian Fiorello created this Life Tributes page to make it easy to share your memories.

Fiorello, Sebastian “Sam” was born in Newark NJ during The Great...

Send flowers to the Fiorello family.