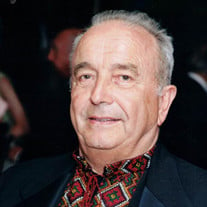 Stefan Kosciolek, 84, of Clifton, N.J., passed away peacefully at home on September 5, 2021. He was born on August 19, 1937, in the village of Berest in Lemkivshchyna (western Ukraine), to Seman and Marianna (Malyniak). After WWII the family was resettled to western Poland, where they resided from 1947 to 1961, all the while longing for their native Lemko highlands. In 1961, the family finally emigrated to the U.S, the birthplace of both of Stefan’s parents. They first settled in Passaic, then in Clifton. Soon thereafter, Stefan became active in the parish life of St. Nicholas Ukrainian Catholic Church in Passaic, serving as an usher for over 55 years, member of the Seniors Club, the Picnic Committee and the pyrohy makers, as well as in numerous committees. In this Church he married Anna Buranicz on May 16, 1964. Together they had four children, who were baptized and received their First Communion at this Church, and who were educated from K through 8th grade at the adjacent St. Nicholas School. Stefan was a very proud and prominent member of the Ukrainian-American community of the region. He served on the board of the Passaic branch of the Organization for the Defense of Lemkivshchyna for over 50 years, as well on its National Executive Board as over 35 years. He was very active and had leadership positions in the Ukrainian Center of Passaic, the Ukrainian American Youth Association Parents Committee, the UNA, Providence, the Self Reliance Association, UCCA and the Lemko Research Foundation, among others. Stefan also volunteered at the CYM Oselia in Ellenville, N.Y. He worked for many years at the Cable Manufacturing Assembly Co. in Fairfield, before retiring in 2000. Stefan and Hania loved traveling with their dear friends, visited many states and countries, by car, air, and boat (cruises). Favorite trips included Fatima, the Vatican, Ukraine, and his only trip back to his home village of Berest in 2012. He enjoyed dancing the night away at zabavas with his life-long dance partner. He adored his grandchildren and great-granddaughter, attending their school, sporting, and cultural events. Stefan taught by example. He lived by God’s two greatest commandments: “You shall love the Lord your God with all your heart, and with all your soul, and with all your mind.” and “You shall love your neighbor as yourself.” Everyone he encountered was touched by his kind and caring demeanor. Furthermore, he instilled not only a strong work ethic, but also a love for God and country in his children and grandchildren. He showed how one can be an American patriot without abandoning your ancestral heritage and understanding from where you came. His mission was accomplished. Stefan is survived by his loving wife of 57 years, Anna, his children: Adam and wife Mirella of Phoenix, Arizona, Milly of Clifton, Maryann and husband Jerry of Hawthorne, and Peter and wife Julia of Middletown, N.Y., his ten grandchildren: Ashley, Michael, Matthew, Ryan, Damian, Stefan, Olesh, Liam, Taras and Havrylko, and his great-granddaughter Jenny. Stefan was predeceased by his parents, three brothers, Konstantin Malyniak, Jan and Antoni Kosciolek and two sisters, Fewronia Leszczynski and Anna Wasiw. The family will receive their friends and relatives at the Marrocco Memorial Chapel – 470 Colfax Avenue, Clifton, N.J., on Wednesday, Sept. 8 from 6-8PM and Thursday, Sept. 9 from 4-8PM. Parastas service will be at 7PM Thursday. Funeral will be on Friday, Sept. 10 at 9:15AM, then to St. Nicholas Ukrainian Catholic Church, 217 President Street, Passaic, N.J, at 10AM. Interment at St. Michael’s Cemetery in South Hackensack. In lieu of flowers, please consider making a donation to the Sisters Servants of Mary Immaculate Monastery in Sloatsburg, N.Y., or to the Basilian Sisters’ Monastery in Horlyci (Gorlice, Poland). May his memory be eternal! Vichnaya pamyat!

Stefan Kosciolek, 84, of Clifton, N.J., passed away peacefully at home on September 5, 2021. He was born on August 19, 1937, in the village of Berest in Lemkivshchyna (western Ukraine), to Seman and Marianna (Malyniak). After WWII the family... View Obituary & Service Information

The family of Stefan Kosciolek created this Life Tributes page to make it easy to share your memories.

Send flowers to the Kosciolek family.