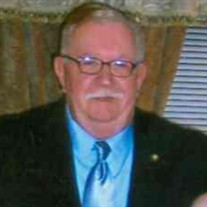 Thomas H. Gilligan, Retired Chief Warrant Officer CW2, of Whiting, NJ died peacefully in his sleep on April 19, 2021 after a seven month battle with a series of illnesses. Tom was born and raised in the Norristown, PA area. He was a graduate of Souderton Area Senior HS. Upon his graduation, he entered a twenty-one year career in the U.S. Army, the time he described as the best years of his life. While in the Army, he earned a Bachelor and a Masters Degree from Boston College in System Analysis. He served his country in many places. These included Vietnam, Germany and the Pentagon. For his service in Vietnam he was awarded the Bronze star. He was a lifetime member of the USA Warrant Officers Association and was an active member of the Doughboys Unit. After his life in the military, Tom pursued various endeavors which involved computer technologies. Tom was predeceased by his parents, James and Alice (nee Smith). He is survived by his sons: Brent (wife Keriwyn) and grandchildren Sarah, Emily & James; James (wife Becky) and grandchildren Rachel and Lyla. Left also to mourn him are his ex-wife and friend Helga Gilligan; his companion of eleven years, Carol Alerine Schebe; his Gilligan cousins; many friends; and his feline son, Liam, with whom he spent many happy years. Interment of Chief Gilligan’s ashes will be in Washington Crossing National Cemetery in Newton, PA, where he will join his mother and father, a decorated WWII hero. Special thanks to the staffs of Serenity Hospice and Winchester Gardens who cared so well for Tom these last three months. Anyone wishing to remember Tom in a special way may make a donation in his honor to the U.S. Army Warrant Officers Association’s Annual Fundraiser at USAWOA, 462 Herndon Pkwy. #207, Herndon, VA 20170-5235 or to any other association that helps veterans and their families. A memorial Mass will be held on Wednesday April 28, 2021, 10 AM at Saint John Kanty RC Church 37 Speer Avenue Clifton Arrangements by Marrocco Memorial Chapel – 470 Colfax Avenue, Clifton.

Thomas H. Gilligan, Retired Chief Warrant Officer CW2, of Whiting, NJ died peacefully in his sleep on April 19, 2021 after a seven month battle with a series of illnesses. Tom was born and raised in the Norristown, PA area. He was a graduate... View Obituary & Service Information

The family of Thomas H. Gilligan created this Life Tributes page to make it easy to share your memories.

Send flowers to the Gilligan family.