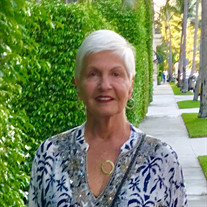 Tina M. Raia of Palm Beach, FL and Saddle River, NJ. Tina and her husband Samuel grew up in Garfield together. They went through the public schools together and began dating during their time at Garfield High School. Tina and Samuel were married in 1969. They recently renewed their vows and celebrated their 50th Wedding Anniversary on August 23rd, 2019. Tina was always an active member of her community. When her children were in grammar school, she was elected president of the Montville Home and School association. After moving to Saddle River in 1985, she continued service to her community and church. Tina was an active member of St. Gabriel, the Archangel in Saddle River, Holy Rosary in Greenwood Lake, NY, and St. Edwards in Palm Beach, FL, serving as a Eucharistic Minister. She served and prepared meals for the homeless at the Bergen County Community Action Center in Hackensack, NJ. Tina was a Dame Commander with Star of the Knights of the Holy Sepulchre. She served her community of Saddle River as the First Lady for eight years, and attended the 2012 and 2016 Republican National Convention, alongside of her husband, Republican National Committee State Chairman, Samuel. While her service to her community and church were noteworthy, her love for and dedication to her family was unsurpassed. Weekends at the Lake House were filled with love, laughter, and big family dinners. She always made holidays magical for her children and grandchildren and her favorite pastime was being surrounded by family. Tina is survived by her loving husband Samuel, her sister Linda Bohannon, her four children, Kimberly & her husband Chris Nardone, Tina Raia & her husband William Trainor, Samuel A. & his wife Benita and Andrew & his wife Erin, and eleven grandchildren, Christopher, Luke, Nicole, Zoe, Tina, Gabriella, Olivia, Samantha, Gianna, Alexandra, and Ella. Visiting will be on Sunday from 2-4 PM & 7-9 PM at St. Gabriel the Archangel RC Church – 88 East Saddle River Rd., Saddle River. Funeral Mass on Monday at 10 AM at St. Gabriel the Archangel RC Church. Interment – St. Mary’s Cemetery. In Lieu of flowers, donations in Memory of Tina should be made to: HUMC Foundation (write “Pancreatic Cancer Research Fund” in the note area on check), send to 160 Essex Street, Suite 101, Lodi, NJ 07644. Arrangements by Marrocco Memorial Chapel – 470 Colfax Avenue, Clifton.

Tina M. Raia of Palm Beach, FL and Saddle River, NJ. Tina and her husband Samuel grew up in Garfield together. They went through the public schools together and began dating during their time at Garfield High School. Tina and Samuel were married... View Obituary & Service Information

The family of Tina M Raia created this Life Tributes page to make it easy to share your memories.

Send flowers to the Raia family.