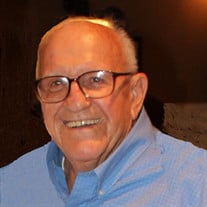 Gumann, William Stephen of Sparta, NJ passed away peacefully surrounded by his loving family on July 30, 2021. He was just one month shy of his 95 th. birthday.Born September 2, 1926 in Passaic, NJ to Mathias and Mary Gumann. William resided in Clifton most of his life before moving to Chelsea Assisted Living in Sparta in October 2020. William was an all-around athlete in Clifton High School. As a freshman he was the star punter and running back for the Mustangs football team and a great pitcher for the baseball team. He was dubbed “Wonderful Willie” by the local newspapers covering his sporting achievements. He was infamous for pitching an18 inning game for four hours to win. On May 11, 1999 William was inducted into the Clifton High School Athletic Hall of Fame. William was an Army veteran of World War II. He was a member of the 88 Blue Devil Division and drove an ambulance in Italy for the Army’s 313 th Medical Battalion from 1945-46. He also was an Army Guard for President Franklin D. Roosevelt’s funeral procession. After his discharge, he continued playing semi-pro football for Clifton Indians and baseball for the Clifton Mystic Rams. He was offered to play minor league baseball in Kentucky but turned it down having just returned from service and away from home. Initially, William worked for Serta Bedding for 17 years where he met the love of his life, Grace Cangelosi. They were married April 24, 1949 for 52 years before her passing in January 2002. In 1962 he worked for the Clifton Board of Education as a custodian and later to head groundskeeper for the Clifton Stadium where he played sports in high school. He retired in 1988. William was a faithful parishioner of Sacred Heart RC Church in Clifton. He was also a member of St. Paul’s Seniors, a member of the Botany Village Seniors Club, the Richfield Chapter AARP 4192, and the American Legion Post 347 for over 50 years. Besides his parents and beloved wife Grace Cangelosi, William was predeceased by his sister Mary Gumann, brothers John Gumann, George Gumann, Steven Gumann, and twin Ernest Gumann. All Gumann brothers served and returned home safely from their service during World War II. William is survived by his loving family:Devoted father of Jane Fahrenfeld and her husband Kenneth of Ogdensburg, NJ Marianne Schak and her husband James of Parsippany, NJ, and son William J. Gumann and his wife Mari of Highland Lakes, NJ. Cherished grandfather of nine; Lyn Leddy and her husband Joseph, Lisa Fahrenfeld, Kenneth M. Fahrenfeld and his wife Molly, Kim Church and her husband Jeff, Jill Blumenstock and her husband Fred, Lori Schak, Kari Schak, William J. Gumann Jr., and Tara Gumann. Adored great-grandfather of twelve; Troy, Luke, and Lindsey Van Orden; Layne, Jake, and Reece Leddy; Megan, Matthew and Kate Fahrenfeld, Olivia Herzenberg, Shawn and Ali Church.​And his loving companion for 17 years Edith Pettke. Special thanks to The Chelsea Assisted Living of Sparta for their overwhelming love and support, and for taking excellent care of William for the past nine months. William touched so many lives in every aspect of his life. He was the kindest, sweetest, funniest, most generous man alive. William was very religious and watched the mass and said the rosary everyday. He loved giving out his “Angel in your pocket” coins to everyone he met. William would pass the time by doing Word Searches, scratching off lottery tickets, playing cards and games. He also enjoyed telling his jokes and making people laugh. When interviewed for the Clifton Athletic Hall of Fame he was asked; What he learned as a Clifton Mustang? He replied; “Always get along with people and enjoy what you’re doing.” He did exactly that! Our hearts are broken. He will be greatly missed by all who loved him. Funeral from the Marrocco Memorial Chapel 470 Colfax Avenue Clifton on Wednesday at 9:15 AM followed by a funeral mass at Sacred Heart RC Church at 10 AM. Interment East Ridgelawn Cemetery. Visiting Tuesday 4-8 PM

Gumann, William Stephen of Sparta, NJ passed away peacefully surrounded by his loving family on July 30, 2021. He was just one month shy of his 95 th. birthday.Born September 2, 1926 in Passaic, NJ to Mathias and Mary Gumann. William resided... View Obituary & Service Information

The family of William S Gumann created this Life Tributes page to make it easy to share your memories.

Send flowers to the Gumann family.